Are you curious about why a new mountain bike crankset is a good purchasing decision? There are several reasons. A new crankset can offer higher speeds, better efficiency when pedaling, and smoother shifting between gears. As with any product purchase, features matters. However, a new crankset with the same features that fits better is still going to be an excellent investment.

However, choosing a new crankset can be tricky since they vary in crank arm length as well as chainring size. Many chainrings are triples which means they have three rings with 22, 32, and 44 teeth. These chainrings are known for being hard to tune, which had led some cyclists to switch to single or double rings, instead. 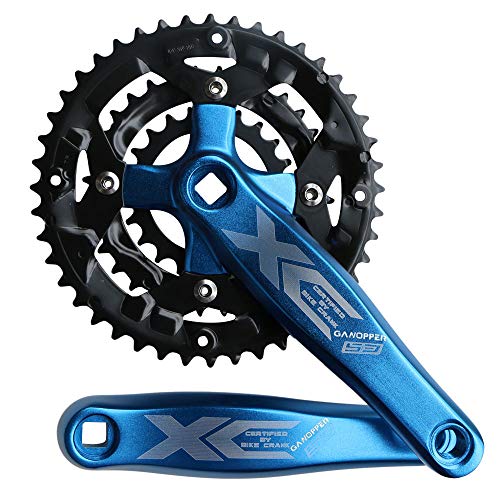 This crankset from Ganopper makes a great choice for a cyclist of any kind. It has three sets of chainrings with 44, 32, and 22 teeth on each. The crank length is 170mm and the product is made out of steel. It is suitable for use on most mountain bikes. The bottom bracket is not included with this product, but it does have a removable crank arm and can be used as a single-speed chainset. 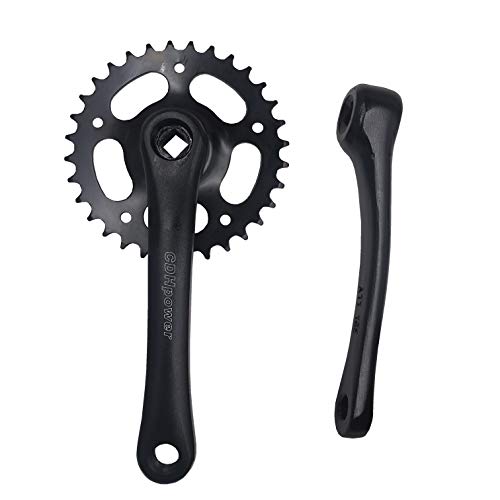 This CDHPower crankset is designed for use with a mountain road bike and comes with a left crankarm, right crankarm, and a chainring. It also comes with a 12-month warranty, so you get peace of mind with your purchase. The crank arms are a forged alloy material while the chainring is made of solid carbon steel. It is 165mm with a square taper interface and compatible with 9/16 inch pedals. 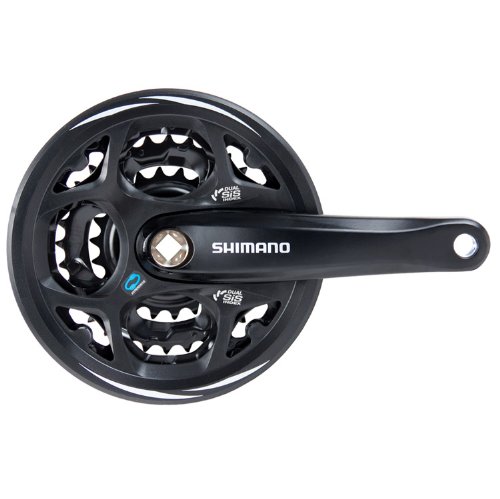 This chainset from Shimano is 7/8 speed compatible to fit a wide range of bicycles. It has a chainguard integrated design and is compatible with a chaincase. It does require a 123mm bottom bracket but that is sold separately. The chainset comes in black or silver so you can choose which you prefer. It comes in several sizes and configurations with lengths of 170 or 175mm. 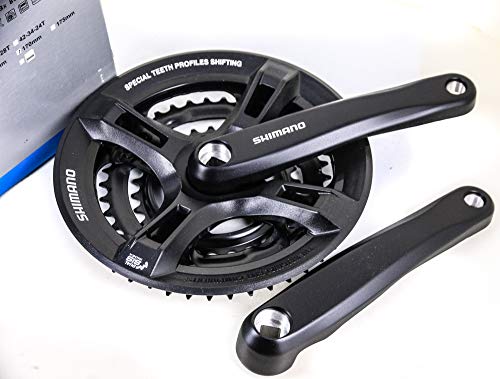 The Shimano Altus is 170mm long and works for 7/8 speed mountain bikes. It has a triple chain with teeth of 28, 38, and 48. This is a lightweight option at just over three pounds that will not slow you down on the rough trails or time on the street. It is compatible with 9/16 inch pedal stem size, which is the most common option.

If you are looking for top performance, the Shimano M361 Hybrid might be the best crankset out there for you. It offers a 175mm crank arm length and comes with three chainrings at 28, 38, and 48 teeth. It does require a bottom bracket that has a square design but comes with a chain guard for convenience and safety on the trails. This is an extremely lightweight component for any mountain bike. 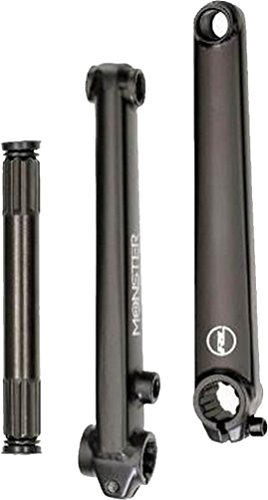 The Redline Monster 2 crankset comes with everything you need except for a bottom bracket. The spindle bolts, sprocket bolt, and spline are all included for an easy to install product. The crankset is made of heat-treated tubular chromoly and includes single pinch bolts which are wrapped and welded for durability. It weighs less than three pounds and comes in a black color.

This Shimano Zee crankset is created for aggressive cycling and is very durable and strong. It is made for downhillers and free-riders who want great equipment without spending a bundle on it. This is a super lightweight option at less than a pound and it comes with the bottom bracket you will need for installation. It also comes in several sizes so you can pick the one that will work best for your needs. 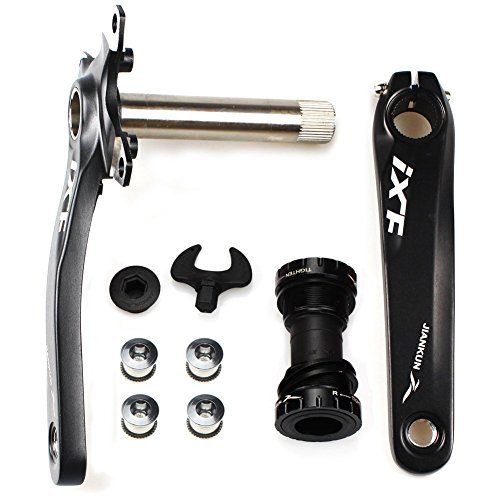 This budget bike crank arm set from Cysky is inexpensive but manages to offer a great performance anyway. It is made of aluminum alloy and comes with everything from an Allen wrench to the crankset, bottom bracket, crank screw, and bolts. It has an arm length of 170mm and a bottom bracket of between 68 and 73mm. It can easily be used as a single or double chain system.

The 104BCD from Ganopper is made of aluminum alloy and includes a left and right crank. It has a length of 175mm and includes the bottom bracket so there’s no need to purchase one separately. It can be used for a single-speed, double chainring, or triple-chainring depending on your preference. It’s also super lightweight for great performance with a weight of just over two pounds.

This NX Eagle Dub Crankset from Sram has been made using 6000 series aluminum for high strength and durability while keeping things lightweight. It uses the new Dub spindle which increases stiffness and offers lower weight than alternatives. As long as you have the right Dub bottom bracket, it will also easily fit onto nearly any bike you need it for.

There are several things to think about when choosing the right crankset for your bicycle. You want to have a crankset with durability as well as high-performance but choosing one that fits your budget may be just as important. We’ll share what different features matter the most and how to compare them with each other.

Length of the Crank Arm

Assuming you have a mountain bike, the standard length of the crank arm is going to be 175mm. Frames that are smaller or designed specifically for women are often going to have a slightly shorter crank arm, often clocking in at 165mm. However, crank arms can range from 165 to 180mm in increments of 5mm.

The first thing to be aware of is that crank arms should be proportional to the length of your legs. However, long arms are better equipped for downhill cycling while short arms work better going up hills. Calculating the right size for you may take some experimentation which can start by determining how natural your current cranks feel.

When we talk about gear ratio, what we are talking about is how hard you have to work to turn the wheels on your bicycle. The ratio is determined based on the number of teeth found on the front chainring to the number found on the rear cog. This can be confusing since higher gear applies to the large front chainring as well as the small rear cogs. Lower gearing is found with a small front chain along with a larger rear cog.

With higher gearing, you can expect to expend more energy but generate more speed and power, which is why it works well for flat and downhill environments. Lower gearing takes less energy but also makes for less power, which makes it excel at steep ascents. You will also want to consider the number of chainrings, and their sizes as compared to your back cog.

The original chainrings were singles where a rear cog was used to change the ratio. Over time, double and triple chainrings were used to offer higher speeds and greater range. The first double chainrings were known as 10-speeds due to the 10 ratios available through the five cogs and two chains.

Mountain biking pioneers created bikes by welding bike chainrings onto beach cruisers for a larger range of gears. A third chainring was also added down the line along with increased numbers of cogs. However, as time goes on, people are moving back to single chains for simplicity’s sake. With multiple chainrings, there is a need for a front derailleur which adds weight, complexity, and cost to the bike.

Power Meters and Need for Use

Some people feel that having a power meter is a good idea when cycling, while others find that it isn’t needed. If you aren’t familiar with this accessory, it measures and stores data about the power output from the pedaling you do. These meters are common with road racing but seen less often with other biking types.

If you choose to add a power meter, it will amplify the price of a crankset. They also aren’t compatible with every brand so making sure they will work together is a must.

A crankset is composed of two parts which include the crank arms and the chainrings. In some cases, each of these will be made from a separate material. Some of the materials you may see include carbon fiber, chromoly steel, aluminum alloy, titanium, and other types of steel.

When you look at materials in a crankset, you should also look at other components. If these are made of carbon fiber, you may want cranks of the same material. These are stiffer and lighter than steel will be while offering a look that matches your bike. However, these also tend to be more expensive.

Steel tends to be the least expensive and heaviest material. Chromoly steel is more reliable and durable if you go with a steel option. Aluminum is just in the middle of steel and carbon and is a great option for those on a budget. Titanium tends to be quite expensive and less common these days with the advent of carbon fiber.

Now you know what to look for when choosing a crankset for your bicycle. You also have a list of some of the best cranksets on the market, one of which will likely meet your needs. A crankset is an important part of your bicycle and can seriously affect its performance, so upgrading may offer a better cycling experience!

Brad grabbed up his first bike when he was a kid and never looked back. He is an avid BMX rider and mountain biker.