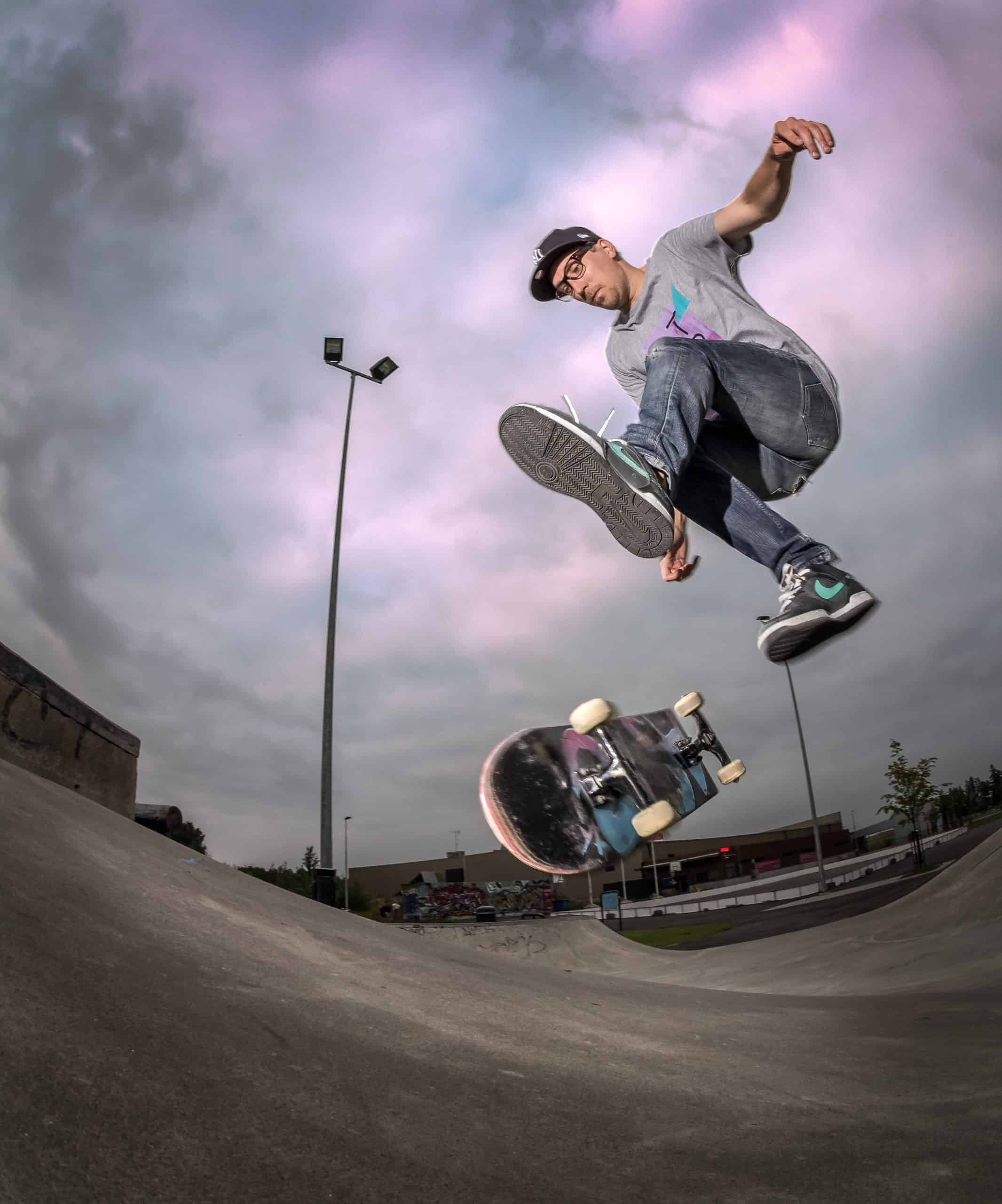 In the world of skateboarding, the term “best skateboard tricks” can mean several different things. When this term is used in the context of new skaters it could mean the best basic tricks for new skaters. These types of skateboard tricks are the basis of more complex tricks. Regardless of their simplicity, they are staples in the repertoire of any skater, new or old.

Speaking in terms of legendary moments, the best skateboarding tricks highlight maneuvers that were pulled off under the spotlight that broke ground for a lot of skateboarding legends. Some of these tricks were performed for the first time and led to other skaters striving to land them. A few of them were pulled off once and may never see the light of day again.

These skateboard tricks are some of the most legendary moments in the history of the sport. Some of these tricks set a standard or record and were eventually bested; some were so big they were never attempted again.These are the best skateboarding tricks ever nailed.

The first trick on the list is larger than life. Danny Way is considered one of the best vert-ramp skaters of all time. In 2005, he came up with the insane idea to jump the Great Wall of China. This was an idea so big, nothing like it has been attempted since.

His sponsors Quiksilver and DC shoes spent $5 million on a ramp that extended from both sides of the wall. Incredibly, Way landed the jump on his first pass. On the landing, he blew his ankle out and had to be rushed to the hospital.

What happened next was the only thing that could top the initial jump. Way left the hospital and showed back up to the jump site with a broken ankle. On his first pass, Way landed a backside-360 with a shattered ankle.

Tony Hawk is probably the most famous face that’s ever existed in the world of skateboarding. Hawk has his own skateboarding brand, and a series of his own awesome skateboarding video games. Skateboarding has Hawk to thank for bringing the sport over the top and into the mainstream.

There have been many legendary moments throughout Hawk’s career that were larger than life. However, the 900 is his career-defining moment.

The 900 consists of two-and-a-half full revolution backspins. Hawk had been chasing the accomplishment of pulling this off on live television for several years. He had landed the trick a few times at home, but never fully brought it to the world’s stage.

During the 1999 X-Games, Hawk would finally realize his dream. In front of the live crowd and millions of television viewers at home, Hawk landed the first 900 ever on live television during a competition. This is one of the most famous moments in all of sports history. At the time, this was seen as the most difficult trick ever performed.

One of the most famous spots for street skateboarding is the Wallenberg 3 blocks in San Francisco, California. Many skateboarders from across the nation and world have frequented this spot in an attempt to conquer it.

In 2003, Chris made his way to the Wallenberg 3 blocks to try his hand. If you’ve ever seen anyone skate this area, you’d know that while it is quite a feat, these 3 blocks aren’t anything of big air fame like a 900, Great Wall of China, or dropping in from a helicopter. However, what this video depicts embodies the dedication of any great skateboarder.

Cole attempted to land a 360 flip off the 3 blocks and failed 65 times, over, and over, and over again. Finally, on his 66th straight attempt, a dirty and bloody Chris Cole finally nails the landing, capping his grueling attempt at dominating the Wallenberg 3 blocks.

Even though there was no huge air or bright spotlights, this raw homemade video, edited down to show the 66 attempts in succession, are a defining piece of skateboard memorabilia. This video shows the grittiness, guts, and dedication from Cole that exist in so many great skateboarders of our time.

Records are made to be broken, right? The only difference between Tom Schaar and other skaters at that time was about 20 years. In 2012, 12 year old Tom Schaar became a boy amongst men. Yes, you read that right, we said 12 years old; and he broke Tony Hawk’s record 900 by nailing a 1080.

Tom Schaar was completing 540 and 720 spins at the age of 8 and learned ollie tricks at 5. He already knew he was destined for greatness. On live television in 2012, he added another notch in his belt by completing three full revolution 360 degree backspins.

In 1997, Jeremy Wray risked his own life on one of the most basic tricks to make the cover of Thrasher magazine. Did we mention it was 50 feet in the air? During the course of this death-defying stunt, he changed the face of the skateboard world and raised the bar for all future skaters.

Wray started at one end of one tower, and skated his way towards the edge. Without a ramp, Wray nailed a huge ollie, transitioning to the next water tower seamlessly. This was a ground-breaking, straightforward trick that set the precedent of huge air and larger-than-life tricks.

In 2001, skateboard legend Tony Hawk and BMX biking pioneer Matt Hoffman attempted an incredible 360 degree loop made that was formed into a ramp. A behemoth structure, this 360-degree ramp is a life-risking feat that won’t allow a rider to bail out after they’ve committed.

One wrong move means a possible neck-breaking injury. After a few nasty spills, both riders ended up nailing the trick correctly. Hawk would go on to continue to nail full revolutions on different versions of these 360 degree loops, and ended up taking one of the worst spills in his career on a future attempt.

In Lake Forest, California, a set of 20 stairs exists that has brought extreme skateboarders and bicyclists from all around the globe attempting to nail tricks from the top of them. Up until 2006, only a handful of riders had landed trick variations of any kind on the stairs.

Nobody has ever landed a flip trick down the stairs. In 2006, Bachinski landed the first ever kickflip, conquering the flight of 20 steep stairs in El Toro.

Neen Williams is without question the master of the heelflip. Nobody has been able to land this trick quite like him. He even has a signature ninja-kick style pose during the middle of the trick.

In 2011, Williams was filming a skate tape with the Baker boys in Burbank, California. This famous set of stairs and rail has been host to a plethora of famous skaters landing some particularly nasty grinds and ollies from the top. On this day, Williams landed not only the best heelflip Burbank 16 had ever seen, but arguably the best heelflip the world had ever seen.

He started off by landing a couple pop-shuvits. Finally, after a couple close calls, Williams ollies off the top and lands one of the most picture-perfect heelflips the world had ever seen. The camera work during this moment was just as amazing, capturing Willliams right at the peak performing his signature ninja kick.

To this day, Dane Burman is still the only skater to nail a trick of any kind at this particular spot. The Municipal Death Rail is a 20 foot section of railing with a 30 foot drop on one side. One wrong move and it could cost you your life.

That’s only the beginning. After grinding the length of the rail, there’s still another 15 foot drop to safety. Needless to say, he nailed the grind, and is still the only skateboarder that’s ever attempted to skate the area. This was one of the best slide tricks or grind tricks ever performed.

This is what you call slightly raising the bar. In 2012, Danny Way came back with another stunt to top his Great Wall of China offering. Way would set the bar high for skateboarding again, but this time he wouldn’t jump over something. He was jumping out of something.

Way jumped out of a helicopter down onto a 30 foot ramp. He took a couple of nasty spills on his first two attempts, and nailed the third one. Including the height of the helicopter, Wrap covered almost a 70 foot height. This insane air made other tricks on a vert-ramp look microscopic.

This trick is the stuff that legends are made of. The Lyon 25 is one of the most legendary gaps known in the skateboarding world. There was no better skater to conquer it than Aaron Homoki, long considered the best gap skater in history.

In 2014, Homoki attempted the biggest gap in history. After a few close calls, Homoki stuck the landing, breaking his board and doing the splits. In the process he tore his ACL.

The injury put him on the sidelines for a year. His first move would shock the skateboarding world. Homoki flew straight to France to exact revenge on the Lyon 25. A few attempts left everyone holding their breath, as Aaron suffered a few nasty falls. Finally, after not giving up, Homoki landed the biggest gap ever ollied.

Until 2015, nobody in the skateboard world really knew who Chris Joslin was. That would all change after this fateful day.

Davis Gap had long been known as one of the most impossible spots to skate. Only two skateboarders had ever landed a trick on it; Jamie Thomas landed a simple ollie at the spot in 1998, and Corey Duffel did a frontside 180 nine years after that in 2007.

Joslin made his attempt look like child’s play. Instead of starting light, Joslin went straight for the kill, attempting the biggest 360 flip ever nailed in history. It took Joslin 12 attempts and he broke six boards, but on attempt number 12, Joslin landed the biggest 360 flip in history and conquered Davis Gap.

In 2003, Bob Burnquist would attempt to nail the same loop that Tony Hawk and Matt Hoffman nailed in 2001 for the Jackass movie. However, Burnquist added another element of danger to the trick.

Amazingly, Bob would remove the top portion of the loop, creating a gap between the top two parts of the loop. This meant that at the very peak of the loop when he was fully upside down, Burnquist would half to conquer an upside down gap. Oh, and he was also skating switch (opposite direction) because he’s Bob Burnquist.

Burnquist nailed it and the crowd went crazy. This was just another chapter in the book of Bob Burnquist battling Tony Hawk to see who could one up the other.

It wasn’t easy coming up with this list of the best tricks of all time. There are several other famous moments in skateboard history that could have easily made this list. It’s moments like this that have defined the sport throughout history. If you want to hang with these legends, start practicing.

We’re looking forward to the next chapter of skateboard history, and more legendary tricks. This is why it’s important to always have the camera rolling when people are skateboarding. You never know when the next legend will nail a larger than life, death defying trick to raise the bar for the skateboard universe.