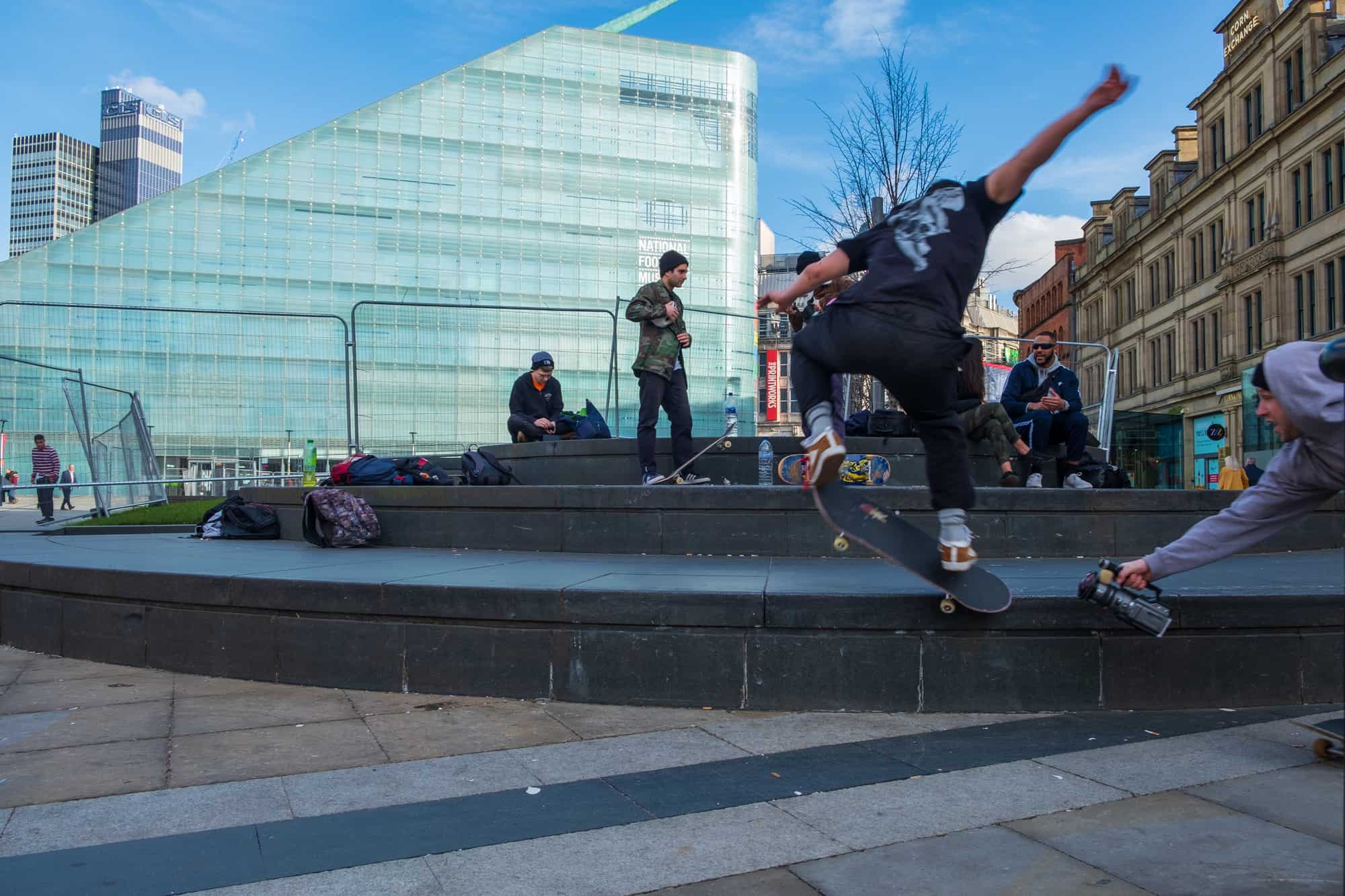 One of the coolest things about skateboarding—aside from skateboarding—is the culture that has grown up around the sport. The skateboarding community, for the most part, is welcoming to new skaters and those who have an interest in skateboarding, but when you are new, it’s easy to feel like an outsider.

Even if you have all of the right gear and you’ve been learning your skateboarding skills, you might also want to get a better understanding of the skateboarding community and its culture. A great way a young skater can do that is by watching skateboarding documentaries.

Even if you’ve been riding for years and are firmly entrenched in the skateboarding world, you will want to check out the best skateboard documentaries list below.

This has become a very popular documentary since it was first released in 2001. Stacy Peralta directed Dogtown and Z Boys, which comes in at just over 90 minutes long. It covers the history of skateboarding in Venice and Santa Monica, and it features some of the members of the Zephyr Skate Team, skaters who were known as the Z Boys.

The film from Stacy Peralta will help you learn more about what it was like back in the 1970s when skateboarding was still finding its way to becoming what it is today and how those kids influenced it. This was where empty swimming pools were first used for skateboarding, thanks to the drought California was undergoing at the time.

Dogtown and Z Boys used footage that was taken back in the 1970s in and around Santa Monica, as well as interviews that were conducted when the film was being put together. Jay Adams, Tony Alva, and a host of others are in the movie, which was narrated by Sean Penn.

If you’ve never heard of Dogtown and Z Boys, this is a great place to start. It’s a skate video well worth the watch whether you’re seasoned or a young skater.

Of course, if you just can’t get enough of them, you might also want to watch this skate documentary. It was made in 2005 and was directed by Catherine Hardwicke. It covers a lot of the same territory as the previous Z Boys film. However, you will also learn more about how the business side of things can cause problems, even amongst friends.

It’s a good documentary that provides a deeper look at some of the biggest and most important names in the early days of the sport and culture.

Still, it’s a window deep into the past of the skateboarding world. This is the first ever Canadian documentary on the subject of skateboarding. It looks into the culture and some of the fear and disrespect that surrounded boarding at the time. Parents and police hated skateboards.

The documentary features some of the earlier boards back when the wheels were made from steel or clay. You won’t see many tricks from the skaters, but you will get to watch a fun, strange film that looks back on the history of this hobby. The present day is very different.

Rodney Mullen: From the Ground Up

Rodney Mullen: From the Ground Up is a short film from 2002 that comes in at under half an hour. This documentary shows a range of talent in addition to Mullen including Tony Hawk, Daewon Song, and Bam Margera. The skateboarding documentary also looks at how Mullen and Steve Rocco started World Industries.

It shows just how instrumental Mullen was when it comes to street skateboarding. It isn’t hyperbole to say that without him, skateboarding wouldn’t exist as it does today. He came up with the flatland ollie and a host of other tricks. Many consider Mullen to be the godfather of street skating because of the huge impact he had on the sport.

This documentary is relatively new compared with some of the other offerings on the list. It is 104 minutes long and was directed by Eddie Martin. It’s a somewhat gritty look at Tas and Ben Pappas, brothers from Melbourne, Australia who wanted to defeat Tony Hawk.

According to Tas, Hawk and others were what kept him from doing the first 900. It’s a strange and twisted story that only gets worse. The skateboarding documentary goes into some dark territories regarding substance abuse and self-destruction. It’s a tragic tale that includes old footage from the ‘90s, and you’ll never look at that era of skateboarding the same again.

The documentary throws a lot of accusations from Tas and Ben Pappas Tony’s way, which he denies. The entire skateboarding story is fascinating to watch. Check it out, check out Hawk’s responses that you can find online, and try to unravel the truth of the story for yourself.

This is another fascinating documentary. It was put out in 2012 and was directed by Stacy Peralta, who did the surfing film Riding Giants. The 120-minute long documentary examines the story of the Bones Brigade and its rise. It also delves into how skateboarding essentially died in the early 80s and how it had to slowly come back from the grave.

You’ll see a lot of famous faces in Bones Brigade: An Autobiography, too, including names we’ve already seen on this list like Hawk and Mullen. You’ll learn about the invention of the 540 by Mike McGill, Steve Caballero, Lance Mountain, and so much more.

If you were skateboarding during this time in the 80s, or if you simply love skateboarding history, Bones Brigade is a documentary a must watch. There’s so much to enjoy, including clips of some of the biggest legends in the sport back when they were in the prime of their lives.

Here’s another older documentary. Skateboard Kings is from 1978, and it’s about an hour long. It was part of the BBC show The World About Us, and it provides interviews with some legendary skaters from the era including Ray Flores, Stacy Peralta, and Shogo Kubo.

It’s a relatively simple documentary, but it does a good job of showing what the era was like in terms of the boards and the attitudes that people had. There’s also some great old footage from Skatopia, a skate park that used to be in Buena Park.

This isn’t to be confused with the skatepark with the same name that’s in Rutland, Ohio, which went up in 1995.

The Man Who Souled the World

Director Mike Hill made The Man Who Souled the World in 2007. The skateboarding doc is 87 minutes long and is all about Steve Rocco and everything that happened with World Industries.

Rocco got a reputation in the industry as being someone who would do just about whatever it took to succeed. He wanted to be the best in the skateboard industry, and he didn’t care if he had to step on toes to get there. Naturally, his attitude caused him to gain quite a few enemies.

This is an interesting look into this part of the industry, and you can still hear a lot of people in the know talking about how much they didn’t like Rocco. You’ll also enjoy this skating film because of some of the cool footage that it provides. You can see skaters like Guy Mariano and Danny Way.

There’s another skater that you might recognize, too—Jason Lee. If you weren’t aware, before he was an actor in things like Mallrats, Alvin and the Chipmunks, and My Name Is Earl, Jason Lee was a pro skater. Do yourself a favor and check out some other videos of him in his prime.

The must watch documentary, directed by Cesario Block Montano, was released in 2006. It’s 98 minutes long and it profiles a popular name in skateboarding culture. Christian Hosoi took the world by storm when he first came onto the scene.

He had a unique style, and he was considered one of the best. However, with all of the fame that he gained in a relatively short period, along with it came problems. The story covers the good and the bad, the highs and the lows of his career and his life.

It even talks about Hosoi getting into trouble with the law and spending time in jail for trafficking drugs. It doesn’t end on a downer, though. It also talks about how he’s changed and how he wants to be someone positive in the field for other skaters and his family.

The skateboarding documentary is also a testament to the problems that fame can bring. You might think that you want it, but you have to know how to handle it and what to do with it when you get it. It’s a must watch.

What Is It that Makes a Skateboard Documentary Good?

Maybe you are interested in seeing some footage from the 80s and 90s when skating was coming into its own with all of the new tricks, boards, and technology. This was when competitions were starting to get underway and when some of the biggest names you know now were beginning their careers. What are the best skateboard documentaries for you?

Ultimately, what makes documentary shows worth watching depends on what you want to get out of the film. The options on this list tend to run the gamut. You should be able to find something that suits you well, whether you want to know more about the skateboarding industry, skate culture, or history.

Some of the names to look for when searching for must watch docs include Marc Johnson, Rudy Johnson, Rob Dyrdek, Sean Malto, and Stacy Peralta. You can find stuff from the present day and movies from the past.

Where Can You Find Skateboard Films?

Skate films are available in many locations today. It’s sometimes possible to find them streaming or for purchase online. You could also talk with your local skate shop. They might have a film or two in stock that you can buy. They could order the film, as well, in some cases.

You’ll find that watching these skateboard documentaries can provide you with a deeper look into skate culture and some of the biggest personalities it’s ever known.  While short clips of “skating fails” or tricks on YouTube can be fun, you’ll likely learn more about what skateboarding means from these films.

Speaking of YouTube, you’ll find that some of these are available there. Others are available through Amazon. Whenever watching, try to support the creators and buy it from a legitimate source if possible.

Of course, with the old documentaries and those that were part of now-defunct TV shows, YouTube might be your best bet.

Become a Connoisseur of the Documentary Format

These are just some of the top skate films you can find today. There are plenty of other great options that you might want to check out, as well. Talk with other skaters about their favorite documentaries to see what else is out there. You’ll find there’s quite a bit to enjoy.

Next time you aren’t able to get out and skate because of the weather or because you aren’t feeling well, consider checking out a couple of these skate documentaries. This can be the next best thing to being on your board.