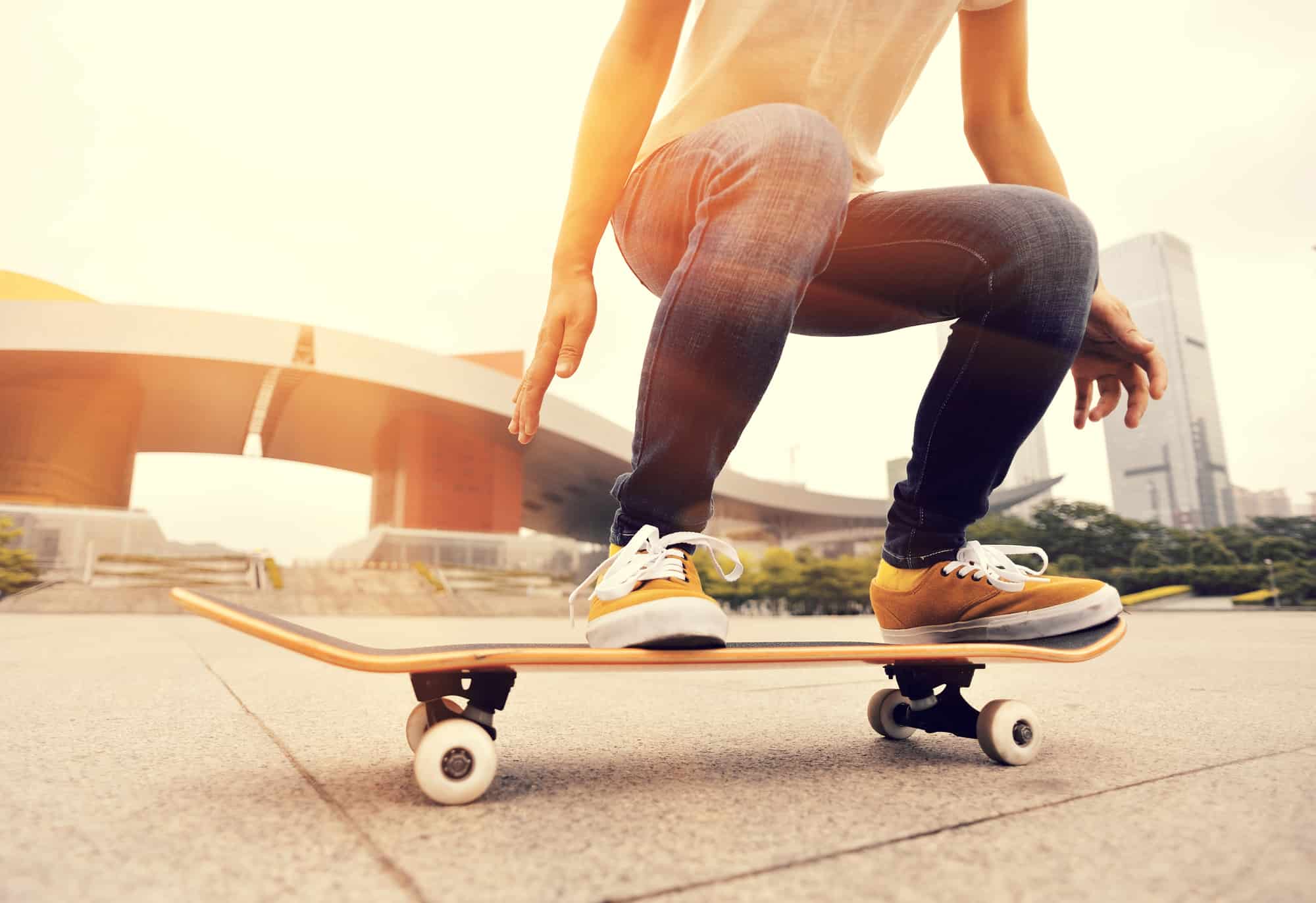 Skateboarding has been a popular activity for several decades, made even more popular in the late 1990s and early 2000s by the peak of the X-Games and other extreme sports events. Over time, various moves and styles have been developed, including some that can be more detrimental to your skill than others.

Even in this community full of people who value freedom of expression and creativity, there are some unspoken rules. Some are even considered career enders, but some are just considered poor form, outdated, or technically incorrect. Understanding the unspoken do’s and don’ts can help new skateboarders fit in and make sure they make the best impression in the skating community.

Pushing mongo is a hot-button issue for a lot of boarders, including those who might not understand what it is or whether they need to worry about breaking the habit. In this guide, we’ll discuss what this move is, why it can be bad, and what you can do instead to retrain your body and get the best footing for any type of course or event.

What is Pushing Mongo?

Pushing mongo sounds like something completely different than what it is. Most people aren’t even sure where to begin assuming what this means, but it’s a simple concept. “Mongo” just refers to when you push with your front foot instead of your back foot when skateboarding.

Typically, people push with their back foot and control the board with their front, which allows them to have optimal foot control for technical tricks and a variety of moves. It doesn’t matter whether you lead with the left or right. This style is all about the front foot versus the back foot doing the pushing.

It’s not that pushing mongo is wrong, it’s just that it doesn’t always lend itself to the best trick opportunities. It could also create other issues or just enforce a “goofy” skating style that affects your image as a skater—unless of course, goofy is the look you’re going for. By taking the time to understand this practice and how to change your footing, you might be able to increase your skill set and learn some cool new moves.

The short answer is not always. Pushing mongo is okay for regular skating and can be fine in a variety of settings. Those who want to do flip tricks, and especially the more technical ones, will want to avoid this style altogether. If nothing else, try to learn normal so that you can switch between the two to do the tricks that you want and improve your skills in different areas.

Pushing mongo isn’t inherently good or bad, and it’s something that every skater has to figure out for themselves. If it works for you, go for it. However, if you haven’t yet gotten in the habit, it’s best to stay away. Beginners are at the peak of where they can learn to skate properly and make the most of their footing. When you’re pushing mongo, that foot can get in the way of your tricks and make it hard to learn.

Unless you’re quick with the footwork, it’s going to be tricky and you’ll be eating a lot of concrete. The best way to stop this method is to never start. Mongo can be useful in a couple of tricks, but for the most part, it’s just more difficult. It makes it harder to control the board, it throws off weight distribution, and you aren’t going to gain as much speed as you would if you were pushing with your back foot.

Think about it for a minute—if you’re shuffling your feet around more and you have less balance and stability, you’re much more likely to bite the dust even just while skating down the average sidewalk or road. Your weight needs to be on the front of the board for the best balance, regardless of whether you’re just learning to skate, or you’ve been doing it for years.

Just because you’re used to it doesn’t mean that it’s the most technically effective stance. Again, if it works for you, it might not be an issue. However, it’s not always something that’s looked positively upon within the skateboarding community.

Tricks that Work for Pushing Mongo

Along with the case against pushing mongo, it’s important to talk about the potential places that it can be used. Of course, it’s still better to be used as an exception or occasional trick than a full-time pushing move. Mongo allows you to spur some pretty cool tricks when you do it right. For example:

Of course, these aren’t tricks that you’re going to be pulling every five seconds, so you can see why pushing mongo doesn’t have to (and probably shouldn’t be) a full-time stance when you’re skateboarding. The more important thing to consider is the sheer number of tricks you could risk messing up if you stick with the mongo style.

Do Any Pro Skaters Push Mongo?

Despite the bad rap that this style gets, there are indeed pro skaters who are known for using the move. It’s not that it’s wrong, per se, it’s just more challenging for some technical tricks, as we discussed. Therefore, skaters go ahead and use it if it works for them. The ones it works for? How about the likes of:

These are just a few of the well-known skaters that either ride mongo or switch between the two stances (normal being the second stance, of course). Gino Iannucci also skates switch with a mongo push and plenty of pros started off skating that way. You can see videos of Tom Penny, Jason Dill, and even Andrew Reynolds pushing mongo early in their careers. Reynolds has even been known to throw down for a trick setup with the opposite hand, an old mongo habit.

These guys changed their style because it worked for them. They didn’t do it because it was “wrong” or because they got picked on for their stance. Like any aspect of skateboarding, it’s all about finding the ride that works for you. If mongo is it, then go for it. Just be careful if you’re hoping to score big skills in the technical trick department because it might be a little more difficult.

How to Stop Pushing Mongo

As mentioned above, the best way to stop this habit is never to start. However, if it’s already too late and you’ve gotten full-on into the mongo push as a default move, you don’t have to worry. You can still correct your footing and get your technical skill back on track.

For starters, you’ll want to make a conscious effort to watch your feet every single time you get on your board. It might make your runs slower and more deliberate, but until you’re back in the habit, it’s a critical move. Even if you have to talk yourself through it or start “learning to skateboard” all over again, it’s worth the effort. Just give yourself some time and don’t force it.

Make sure that you plant your foot firmly on the board in a way that gives you a feeling of control. Then, use your back foot to push off slowly, and see how much smoother the ride is. You’ll have to get a feel for it, just like you did when you first started skating, but eventually, it will come more naturally. Do this a few times, and then try to go for a short ride.

If you need to, consider reminding yourself along the way or coming up with a way to keep your feet in the normal stance, such as stopping every time you have the urge to switch feet. Count to five, then start again. There are plenty of little ways you can remind yourself to maintain your footing when trying to break this habit.

You can always find a friend to help, too. Get them involved in holding you accountable. Make them watch your feet so that you can watch the path ahead. If you’re still struggling with the “how”, hop online or ask around your local skatepark and find out if there are other people who have kicked the mongo habit. They might be willing to share their tips and what helped get them through.

“They’re All Going to Laugh at You”

One of the biggest arguments in the “too cool for school” skater community is that pushing mongo just looks “silly” and gives riders an unprofessional image. It’s skateboarding, not Wall Street—how professional are you expected to get? Sure, if you skate “goofy” or strictly mongo, you might get a little flak from other skaters here and there.

However, when you’re skating well and landing tricks, they’ll quit laughing. Whether or not you can land them all will be up to you, but nothing is stopping you except your own abilities. Skateboarding is about freedom of expression and creativity. Even if you find other reasons to break the mongo habit, please don’t let it be because of what other people think.

The reason that people give this move so much bad publicity is that they want to keep the “sport” of skateboarding reputable and give it somewhat of a professional image. The ones that are focused on these aspects look at pushing mongo as a “substitute for the real thing”, and often liken it to shooting underhanded in a basketball game or otherwise improvising a standard move.

Along with pushing mongo, there are some of those other unspoken rules that you should know about. For starters, the community is all about improving the often-negative reputation that they get, so they don’t want anyone who’s there to cause trouble. Be nice or pick a new hobby, according to the biggest and best in the skateboarding world. There’s a lot of world out there to skate, but some areas are full of people and others are off-limits. Be respectful, always.

Another big no-no is skating with headphones on. Sure, if you’re out on your own, it’s no big deal. However, if you’re at the park or enjoying a session with your friends, you should be paying attention to what’s going on. No one likes “annoying headphone guy”.

Owning a skateboard doesn’t make you a “skater”. In the height of the skateboarding craze of the late 90s and early 2000s, so many kids and young adults rushed out and bought skateboards to become skaters like the legends they idolized, only to learn that skateboarding is a lot more difficult than it looks. Thus, the boards sit collecting dust and these people are no more skaters than those playing a Tony Hawk game on their console.

Ok, so what’s the bottom line? Should you or should you not be pushing mongo? Ideally, you’d avoid it at all costs. It’s not a great style, it affects your technical skill, and it teaches your feet to be lazy and makes it easy for them to get tangled. It’s always better to stick to the normal stance if you can. However, if you want to add something fun and change things up, pushing mongo might be the perfect way to go. Remember, it’s all about skating your way, no matter what that means.