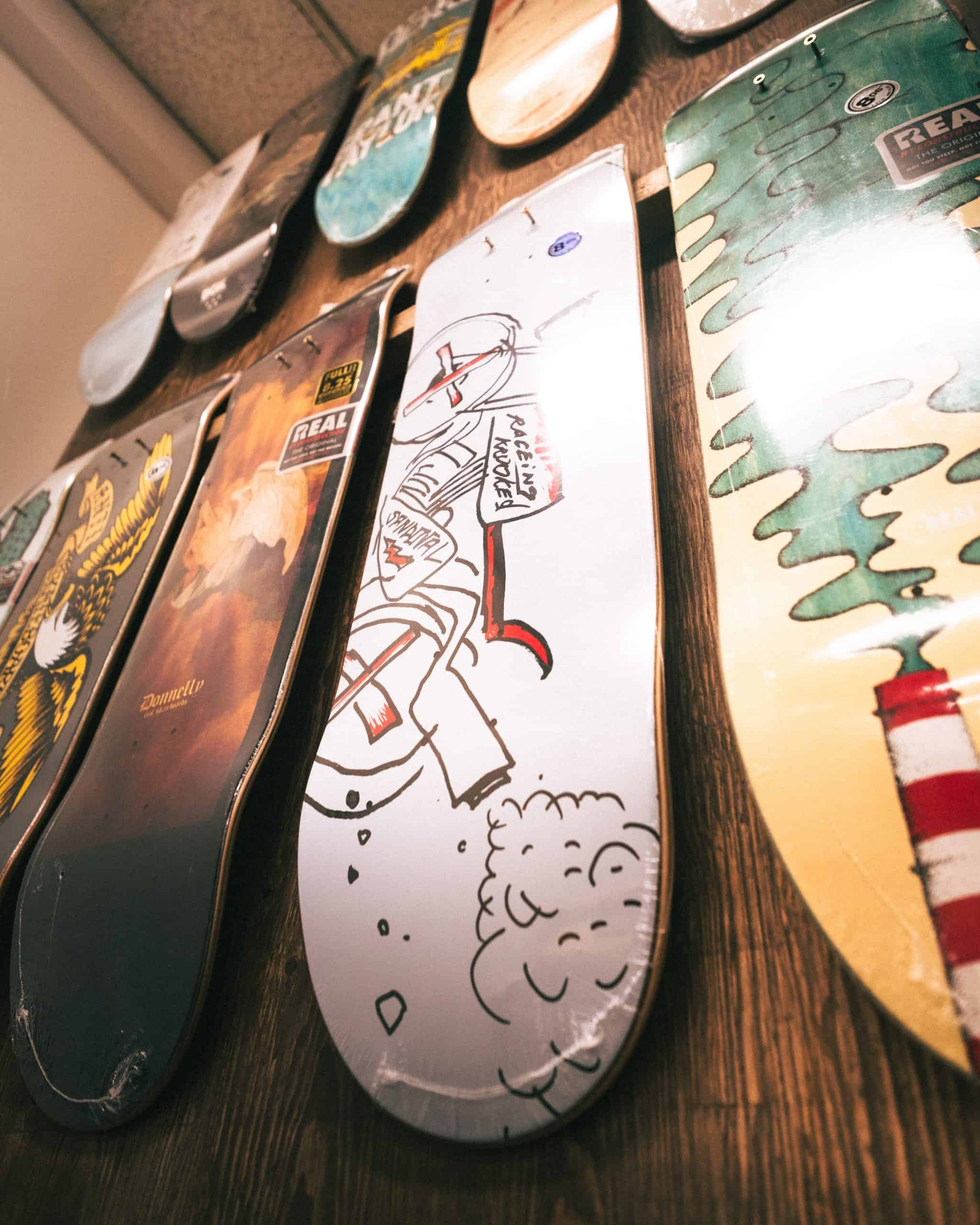 Skateboarding has been around for over 50 years in San Diego. The first skateboard was created by George Powell and Larry Stevenson in the 1950s. Skateboarding started out with a wooden plank attached to metal roller-skates that had two small wheels on each side of the board. This invention is what we now know as the “penny board.”

As time went on, so did the technology behind skateboards, which led to different materials being used, such as aluminum and fiberglass. With all these new inventions came new tricks, which helped open up various jobs within this industry. These jobs include skating instructors at local parks or even stuntmen who perform stunts in movies like Jackass.

Presently, there are many places people can go when they want to skateboard any time of day, at any time of the year. The skate parks in San Diego are among some of the best in the country.

The people that have pioneered this sport shaped it into what it is today and were responsible for its revival after the 1970s drought are deserving of recognition. The first skateboarders to come out on top in San Diego were usually surfers or other types of extreme athletes looking for an alternative form of transportation. They would use their boards as a way to escape from police officers or just cruise around town, meeting new people along the way.

Skateboard fans from far and wide venture to San Diego to sample some of this area’s rich skateboarding culture. The area acts as a form of Graceland for the fans of skateboarding and is usually a bucket list type of area for aspiring pro skaters.

A journey to sunny San Diego wouldn’t be complete without a tour of the city’s famous skate shops. If you find yourself along the southern California coast, don’t forget to stop in at some of these legendary skate and surf stores.

This surf and skate shop found its roots back in 1990 when Ocean Experience became Southern California’s first school of surfing. For ten years, the crew at Ocean Experience offered surfing lessons to anybody who was willing to learn.

It wasn’t until ten years later, in 2000, that Ocean Beach Surf and Skate would open its door as a home base to Ocean Experience Surfing School. Since then, this retail store and surf school has transformed into one of the largest, most all-inclusive surf and skate shops in the country.

In 2010, OB Surf and Skate expanded from a portion of the commercial space they rented and took over the entire building. This opened up the floor to an incredible 7,000 square feet of surfing and skating heaven; that’s exactly what Ocean Beach Surf and Skate is.

This shop now boasts an outdoor portable skate park, an indoor skating area equipped with a half-pipe, and a full-service snack bar equipped with an art and yoga studio. They also have a full array of top skateboarding brands for guests to choose from including Autobahn, Bones, Spitfire, and Shorty’s.

Slappy’s Garage was a failed venture opened by former pro skateboarder Jason Carney in Ramona, California. In an effort to support the local Ramona skate scene, Carney opened the shop only to see the doors close a short time later.

Eventually, in 2012, Carney would reopen in San Diego. This version of the store has become a local success.

Jason Carney gained popularity in the 1990s as an innovator of the handrail version of skateboarding. These days most of his energy goes into his San Diego skate shop.

Slappy’s is named after a popular curb-skating trick called The Slappy. It’s a variation of a boardslide that’s been made popular by the subgenre of curb skating, which is wildly popular on the streets of San Diego.

Slappy’s is a laidback local skate hangout with graffiti lining the walls and floors. It was given the moniker of garage because that’s what it is; Carney uses the space to create and manufacture his own decks.

Slappy’s might not be the biggest skate shop in San Diego or carry all the flashy name brands, but one thing holds true. If you want a custom skateboard for a great price designed by a local legend, Slappy’s is the only place in town.

If there is an archetype for the modern-day skate shop, Overload would have to be it. Even though they’re widely known in San Diego for their huge variety of top brand names in skateboarding, they’re also famous for their clothing selection.

Overload is located in the heart of San Diego in the city’s Northpark neighborhood. This famous skate shop opened in 2000 and has since become not only a retail space, but also an event location and art gallery.

Over the years, Overland has played host to many famous skaters, and sports figures, including Michael Jordan. Jordan visited the store to commemorate a special release of his Jordan brand sneakers.

For their skating supplies, Overload features famous brands like Bones, Spitfire, and their own famous Overload namesake. However, their clothing is what really steals the show at this skate shop.

Overload features clothing brands Nike, Nike SB, New Balance, Jordans, Obey, Primitive, RIPNDIP, and many more. Their selection of special edition shoes is among one of the largest in San Diego. Famous versions of Nike Dunks and Nike SB’s have been commemorated here, such as the Nike Dunk Grateful Dead sneakers in 2020.

Route 44 is a picture-perfect example of what an old-school skateboard shop should look like. This grungy San Diego selection is true to its skateboarding roots and keeps some of the best name brands on skating lining their shelves and walls.

The owner Matt Owen virtually started his own subgenre of skating when he opened Route 44. All you have to do is show up to a skate park or popular skating location and count the number of people wearing Route 44 clothing, and you’ll understand what we mean here.

Route 44 is also unique in the fact that it carries a wide selection of vinyl records as part of its merchandise selection. This skate shop has sold vinyl since day one, and records are what partially made this brand famous in its earlier years.

This skateboard shop is 100% pure San Diego skateboard roots. If you’re in the area and are a fan of skateboarding, this grassroots shop shouldn’t be missed.

If you were making a list of the best staple skate shops in San Diego, Soul Grind would have to be somewhere around number one. This board shop has been in business since 1993, with owner Pablo Smith at the helm since the beginning.

Pablo sold skateboard and skateboard equipment at local swap meets in San Diego for nearly 20 years throughout the ’80s and ’90s. With the help of artist Phil Goodrich, Pablo would launch Soul Grind and enjoy success in the retail skate sector for years to come.

This meager shop started as a hole-in-the-wall 10×20 closet space retail store. Since its humble beginning, Soul Grind has expanded into a 600 square foot mecca for all things skating.

Soul Grind sells cruisers, longboards, and street skateboards of various brands. They also carry an extensive lineup of bushings, bearings, wheels, and trucks. However, it’s the customer service of Soul Grind that makes this location special.

Pablo Smith has an active store policy that will replace any worn or broken skateboard parts if you bring them into the store. The items don’t even have to be purchased from Soul Grind to take advantage of this policy.

Soul Grind is also famous for the number of vintage and signed skateboards that Smith has in his collection.  Pablo even has an early version of the original skateboard, which was a wooden 2×4 with a set of wheels strapped to the bottom.

Pacific Drive is the oldest skateboard shop in San Diego. This gem first opened its doors to local skaters in 1987. Incredibly, Pacific Drive is still going strong to this day.

Founder Jim Ruonala is credited with contributing a great deal to the legendary skateboard culture of San Diego. Pacific Drive has promoted a lot of famous San Diego area skateboarders since they opened their doors in 1987. The list includes Danny Way and Sean Sheffey, among others.

Some of the earliest skateboard videos out of the San Diego area featured in magazines like Thrasher, and others featured skaters that were a part of the Pacific Drive team. The team still continues to produce a large talent pool that features homegrown legends.

Besides carrying heavyweight skateboard brands like Scum, Bones, Autobahn, and others, this skate shop has one of San Diego’s most extensive shoe collections. If you’re a fan of Nike SB or Nike Dunks, then Pacific Drive should be on your list of places to visit in San Diego.

Like its counterpart Overload, Pacific Drive has played host to several commemorative events surrounding various sneakers. Even though this ancient skate shop has been in business since 1987, Pacific Drive shows no signs of slowing down anytime soon.

Rounding out our list of the best skate shops in San Diego is Muir Skate. This particular skateboard store is specifically in business to service longboard enthusiasts.

A longboard is a larger version of a normal skateboard, measuring anywhere from 33-inches to 44-inches. Skateboards measuring up closer to the latter are more common than boards existing close to the lower end of this window.

Longboards are made for downhill, high-speed styles of skating. These boards generally are equipped with larger wheels that make navigating rougher terrain much easier. Bigger wheels also make it easier to remain stable while you’re carving hills at a breakneck pace.

The hilly terrain of San Diego is perfect for the extensive longboarding scene in San Diego. Because of this ideal landscape, there’s a high demand for quality longboard equipment, and Muir Skate is happy to oblige.

The experience at Muir Skate is mapped out to contribute to the overall longboarding experience. Their staff is knowledgeable and friendly, and they offer in-store tutorials and lessons as well as plenty of online resources.

The sport of longboarding boasts nearly 20 different types of longboard decks, and Muir keeps each type in stock. It’s not hard for a skater to find what they need at this accommodating longboard shop.

The staff at Muir also offers custom-built longboards if you’re not into pre-built designs straight from the manufacturer. You can always buy your longboard one piece at a time and design it yourself.

The sport of longboarding is such a massive discipline with so many different equipment styles; it’s hard for a skate shop to carry everything to accommodate each different riding type. However, Muir does a great job of doing just that.

In a city with a rich skating history like San Diego, it takes an extensive offering of skateboard shops to accommodate the incredible scene. These skate shops do a great job of supplying the city with all of its skateboards and skateboard accessories.

If you’re a skateboard enthusiast and find yourself in So-Cal, you should make your way to San Diego to check out a few of these skate shops. Even if you don’t make a purchase, the history lesson you’ll receive is worth the trip alone.