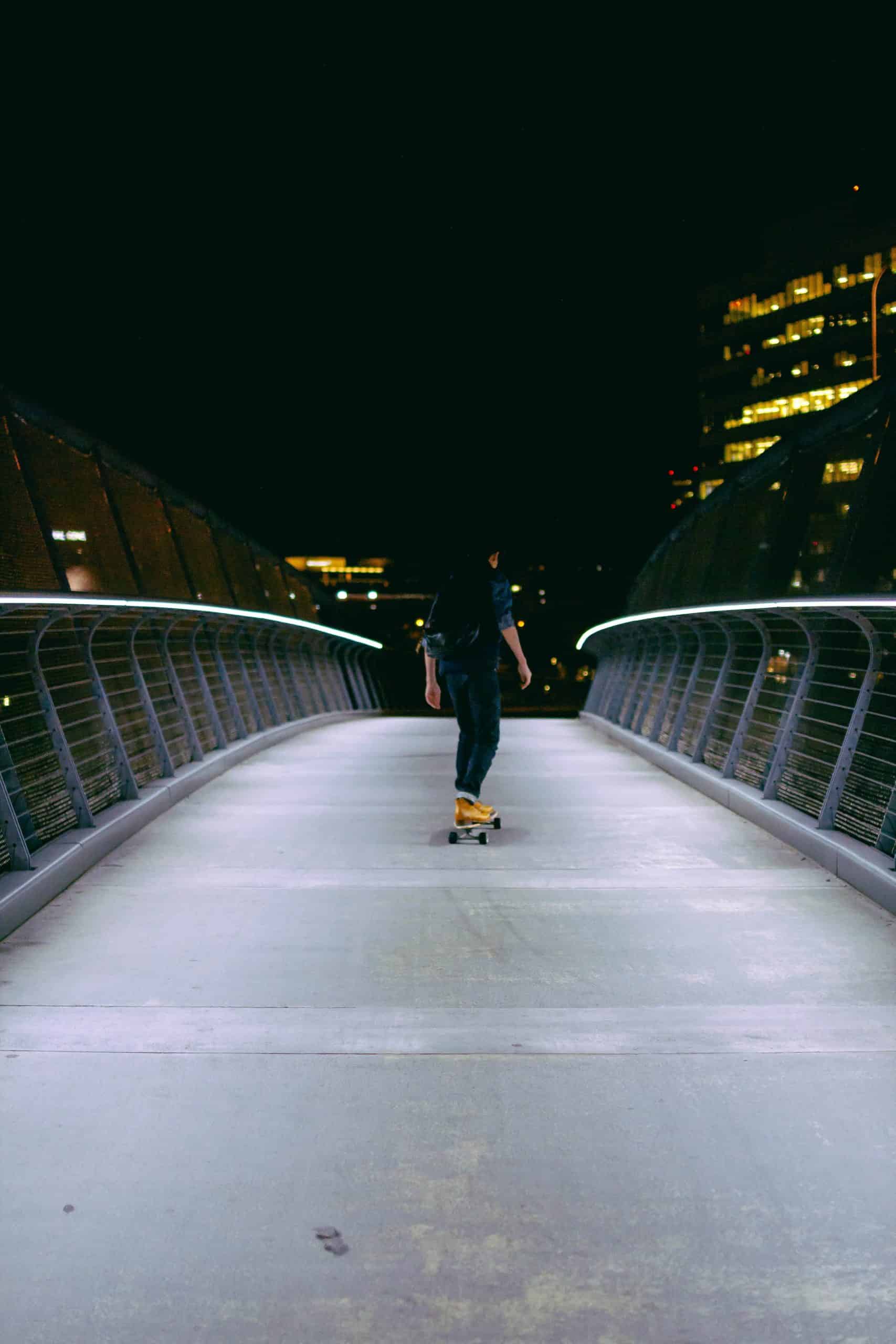 Skateboarding at night is a rare commodity that brings different elements to the sport that aren’t afforded during the day. It could be as simple as having extra time that isn’t available during a daytime schedule.

Some skaters prefer night skating because there are fewer people on the streets, which makes it more personal and certainly less crowded. For people who prefer to skate with more of a personal element, there is also more privacy involved.

The excitement factor can also be a benefit. There’s a certain amount of risk involved with skating at night that brings a level of thrill that can’t be attained during the daylight hours.

The risks involved are also higher, and safety could be an issue. Without having the benefits of safely lit spaces, a skateboarder runs the risk of being prone to accident or injury. It’s harder to tell the difference between smooth and rough ground.

It’s much harder to see cracks and rocks on the sidewalk, and this could lead to a nasty fall. Despite these risks, night skating is still an activity that is chased by skateboarders around the globe.

If you’ve never had the chance to skate at night, this article is for you. These are the highlights of night skating.

The Highlight of Skateboarding at Night

·         If you’re a new skater, you can skate in privacy without having to worry about an audience or dodging crowds of people

·         There’s an element of mystery to skating at night, bringing excitement that can’t be achieved during the day.

·         Skateboarding at night brings a mellow, laid-back pace that can be very relaxing. There’s less stress and anxiety involved for some skaters at night.

·         If you use skateparks and other places that are regularly frequented by other skaters, night skating gives you the chance to avoid the crowds

·         Some people just don’t have time to skate during the day, at least not as often as they’d like. Skating at night brings more time and opportunity.

·         Sometimes it’s a chore to take the heat of summer. If you skate at night, it can be substantially cooler than day skating.

·         There is a unique sense of adventure and freedom that comes with skating at night.

There can be other advantages to night skating, but these are usually the most important. Now that you’ve seen the benefits of night skating, let’s examine some of the best places to skate at night.

Best Places for Skateboarding at Night

Skating at night does bring a lot of benefits, but the choices for locations are substantially lower than during the day. Some places aren’t accessible at night, which can limit a skater’s choices to practical areas for skating. These are some of the best options for night skating.

A well-lit, downtown area can be an ideal place for skating at night. The bright lights of the buildings and streetlights usually help enough with visibility to make night skating easy in urban areas.

The streets are often much less crowded at night. You won’t have to fight against large groups of people or be as vigilant watching for collisions.

The same caution should still be exercised as day skating. Be prepared with safety equipment and be mindful of traffic. Even though there are empty streets there is still a high level of danger.

Some skate parks are open later at night in certain locations. These can be good times to visit when there aren’t as many people using the facilities.

Make sure it’s not against the rules to be there past a certain time. It’s never a good idea to climb the fence if the gate is locked, so pay attention to time regulations.

Certain city parks are open to the public late. Some can even be found that welcome people 24 hours per day.

These parks bring a great opportunity to skate at night. There are also fewer people on the sidewalks, so you’ll have a lot more freedom and a more comfortable ride.

Empty parking lots near your home can be a great place for night skating. You should always be mindful of security and trespassing rules here.

Normally these parking lots are well lit, which can supply the visibility you need to skate safely. Be aware of your surroundings and always remain safe. There is also an added level of risk from night skating. You should avoid parking garages since they are normally closed.

If you notice any suspicious characters or activity, you should exit at once. It’s never a good idea to go skating at night by yourself.

What about equipment for skating at night? There are certain items you should bring to make night skating more enjoyable and safer. Consider packing these items for your night skating trips.

Check out: Places to Skate

Equipment for Skateboarding at Night

Consider bringing all or some of these items with you if you’re night skating. Most of these pieces of equipment make your ride much easier and raise your level of safety.

·         A quality headlamp or flashlight can make your life much easier when you’re skating at night. If you’re in an urban area or park normally there is plenty of light, but you still encounter certain areas where a lack of light can be a problem. Having decent lighting can be a lifesaver.

·         There are special board lights made for night skateboarding that can make you more visible during the night hours. The board lights are installed on the bottom of your skateboard and make it noticeable from a considerable distance.

·         You should always bring a first-aid kit when you’re night skateboarding. There is a higher chance of injury because of the lack of visibility. Always stay prepared by having safety items.

·         Wear brightly colored clothing and pack a fluorescent jacket with you. These jackets are available at most department stores and uniform outlets.

·         It’s never a bad idea to bring backup equipment with you at night so you’re not stranded. Bring extra wheels and trucks in case you suffer equipment malfunction.

What about the dangers or risks of night skating? Let’s examine the potential negatives for skating at night.

Risks of Skateboarding at Night

·         Skating at night can put you in unfamiliar territory. Even if you’re in places you’ve been before, every landscape is different at night. Make the area more visible by using your headlamp or flashlight to avoid dangerous obstacles.

·         Sometimes nighttime isn’t the safest environment, to begin with. If you’re skating in a city area, always bring someone with you. Skating in groups helps you avoid the chances of becoming a target for thieves or other criminals.

·         There’s a higher risk for skating over cracks and rocks. Using a flashlight or headlamp and staying in well-lit areas can lower these risks, but the chances are still higher. Stick to the most well-lit areas and be aware of the surface you are skating on. If it’s possible, stick to paths and streets you are familiar with.

·         Ride slower at night and try to keep your speeds to a minimum. This lowers the risk of wiping out because of the lack of visibility. Be vigilant of car drivers and other motorized risks. Keeping your speed down leads to safe riding.

·         Finally, there is always the risk of being confronted by police or security. If you find yourself in this situation, don’t run or try to avoid them. Remain calm and explain your situation in a calm and polite manner.

Extra Tips for Skateboarding at Night

Here are some final tips for skateboarding at night. These aren’t mandatory but can still increase your overall experience when you’re skating at night.

Night skating isn’t a daily or regular occurrence. Consider recording the experience to have as a reminder of the adventure. These recordings can be great to show your friends or post on sites like YouTube to help educate other skaters.

If it’s in the budget and you can find the area, bring bigger lights and stage your own area. Large floodlights are perfect for night skating. They can make the area just as visible as a daytime setting. You’ll need a large area like a parking lot to stage these floodlights. Using your backyard if you have ramps is also a possibility for using these lights. A local park could also bring the potential for using these giant lights.

Skating at night can have a lot of benefits over daytime skating. However, it isn’t something that you can do daily.

You need to prepare for your night skating adventure. Ensure that you’re equipped with the proper supplies and people are aware of where you’re going. Whenever possible, skate with the largest group of people you can assemble at night. This increases your safety and adds to the adventure.