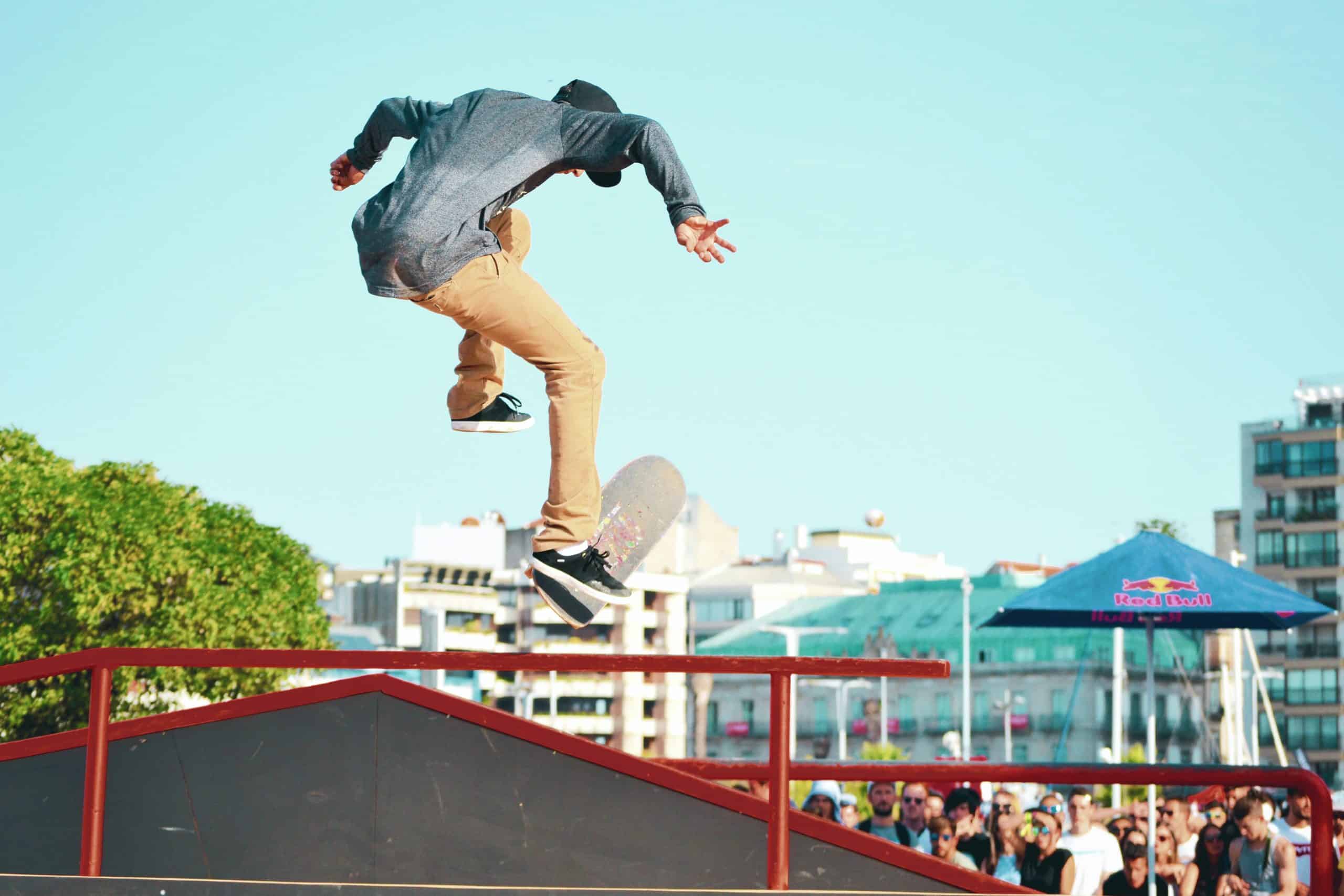 The sport of skateboarding has always been held together by competition and community, which is why so many contests are held around the globe every single year. As the number of skateboarders grows, communities organize to create more options to compete and have a good time.

Skateboarding competitions can be fun to participate in or watch. Whether you’re going for substantial cash prizes or watching from the sidelines, the experience will be exciting and give you bragging rights when you tell all your friends.

This article will give you information on the best competitions you can be a part of around the world. Learn about key cities for events, who sponsors contests, and what winners can get for placing well and showing their skating skills.

Choosing Between Skateboarding Competitions for Professional or Amateur Skateboarders

As far as competitions go, there are different qualifications and rules pertaining to which skaters can participate. In most cases, competitions for amateurs take in skateboarders who aren’t paid to compete. On the other hand, competition for professionals consists of skaters with endorsements or sponsors who pay them to show off their skills.

No matter how good you are on a board, competitions will typically include runs and jams. The jam is a portion where a group of skaters is on the same course at a skatepark for a certain amount of time.

Those who do the best at jams will typically qualify, which lets them do a run. The run is the portion of the competition where skaters are on the course on their own while a timer ticks down.

The Street League Skateboarding (SLS) World Tour is a platform with all sorts of sports to watch. It was initially created by Rob Dyrdek in 2010 and partnered with Skatepark of Tampa in 2015 to build a global qualification system. This caused the Tampa Pro to become a qualifier for North America.

The world tour event has about four events per year with prizes of over $1,000,00 in recent years. You’ll see skateboarders from every corner of the globe who fight to win cash prizes.

In addition to the monetary prize, victors also get a chance at the SLS Nike SB Crown World Championship.

Some of the best places to compete in skateboarding are located in Tampa, Florida. For instance, this is the only place you can strap on your skate gear and win a grand prize at the Tampa Pro competition.

Hosted by Skatepark of Tampa, Tampa Pro takes place over a weekend and showcases rising amateur skateboarding stars. Many winners of this event in Tampa, Florida, have gone on to go pro. However, doing well can nearly guarantee a chance to rise in the ranks.

Five judges make up the panel, all of whom used to skateboard professionally. Tricks are assigned scores based on originality, flow, consistency, course use, style, trick variety, technique, and trick difficulty.

Recognition and the right to brag are a given for winners, but there are no prizes for this event.

However, the events at the X Games go far beyond only skateboarding. You can also see someone on a BMX or participating in other extreme sports.

The best skaters are invited to this competition every year. The prizes can reach up to $100,000 for each sport, and skate champs are split into bronze, silver, and gold rankings.

Before the SLS was even thought about, the X Games were the best competition to make money and show your stuff on the ramp.

The Dew Tour is a content platform and skateboard contest series that pulls in over 80 of the best skaters around the world to compete in competitions in park and street, as well as the creative team challenge. A shop challenge competition is also available to skate.

In 2019, this event was the first global event to qualify people for the Olympics in the United States.

One of the perks of this competition is that it’s entirely free and the public is welcome to visit. It also incorporates a festival for all ages with giveaways, public skateparks, live music, and learn-to-skate areas.

One of the most unique competitions is Exposure Skate, which is only for females and allows both professionals and amateurs. This skate event is in California and brings in around 170 skaters from around the world.

The purpose of the competition is to show the power of women skaters and empower girls to get going with the sport. It also acts as a way to raise money for survivors of domestic violence. This competition provides more than $60,000 in cash prizes.

While there are both professional and amateur events, there are also smaller contests, such as vert, street, and bowl. Amateur contests are based on age and include an open that leads to a qualifier and then the finals.

The Vans Park Series is one of the most significant contests in the skateboarding world. The Park Series moves around the world while searching for the best skaters to go to the world championship.

As you might guess, this Park Series is sponsored by Vans, which makes shoes for skateboarding. It started in 2016 and has drawn a lot of attention since then due to all the companies sponsoring skaters in the event.

The Vans Park Series is one of the first tours that has been entirely covered by social media since Twitter, Instagram, Facebook, and other platforms were booming when it started.

In addition to the Vans Park Series stellar coverage, everyone enjoys watching the regional championships. The best skateboarders compete next to each other to win the championship and gain great rewards from Vans.

Red Bull Solus is designed for professional skateboarders. It was started by Ryan Sheckler and takes place at his skatepark, the SC Sandlot.

Sponsored by one of the largest energy drinks manufacturers, this tour has a total of 13 competitors. Each of them has an hour to do tricks and show skills to a panel of three judges. The rider who wins gets $2,500 that can be donated to a local skate store that they choose.

Damn AM was created in 2001 as a way to bring Tampa Am to other locations around the globe. As a result, you’ll find the event in various cities in the United States and across the world.

Once the riders are whittled down to the best 12, each of them is qualified to go to Tampa Am in Tampa, Florida. The winners at each location will reach the semifinals and get $500 that sends them on toward Tampa.

Beyond the ability to win at Tampa Am, the person who skates the best two finishes over the year is known as the Damn Am of the Year and will be presented with $1,000.

Initially introduced in 2007, Zumiez Best Foot Forward is a traveling competition that moves from place to place in the United States. It’s made to offer amateurs the chance to get exposure through a variety of skateboarding events.

The judges for this event travel to each location but change up each year. So when the competition reaches a new city, winners can expect to win skate gear, boards, shoes, and much more.

In many cases, this competition is a qualifier for national competitions

This is a selection of street and bowl skateboarding events for people of all ages. It moves across the US, but the awards are handed out in Tampa on an annual basis.

Some of the profits made from the event help the Grind for Life Organization, a non-profit which assists cancer patients with travel expenses to get proper treatment.

This series makes use of jams and includes three judges to assess the difficulty, style, and trick selection of every run.

If you’re looking for skateboarding competitions in the United States, you can’t beat the fun of Boardr Am. This is one of the biggest competitions for an amateur skater and stops off at various places across the country.

Check a local skate shop to find out if the skatepark near you will play host.

Whoever wins the competition at each location will be sent on to the Empire Open Series Finals. In addition, you’ll get free lodging and up to $500 for your travel expenses.

Besides the chance to skate at the Empire Open, you could also win the Zumiez Destroyer Award if you pull off some sick moves.

Originally created as a local comp in Prague, Mystic Sk8 Cup has become more prominent due to its practice of improving or building new skateparks every year. This inspires the participants to enhance their skills and improve their routines.

This is a competition open to those of all genders and has a grand prize of over $50,000. The event typically starts with a concert and allows visitors to tour the area to learn more about it.

This cup is sponsored by many European countries and has been in place for more than 25 years. As it grows, participants come from everywhere from the EU to North America, Asia, and more.

A second grand European championship is held in Copenhagen every year and is filled with participants from the US and Europe. It began in 2007 and drew massive crowds, which led to creating additional venues in other locations.

The competition sometimes moves around. For instance, it might start in Copenhagen, move to Amsterdam, and finish off in Berlin. It lasts many days and brings in skaters from all sorts of locations and backgrounds.

It all comes down to your needs and expectations. You can visit a local skate shop to learn more about the biggest competitions in your area.

Visit a world tour, watch professional skateboarders if you’re in a key area, or keep up to date on who wins the most annual awards.

Skateboarding is a fun and exciting hobby for anyone, and competitions are hosted around the world. All you need to do is find the right contest to attend, and you could be known as a street skater who saw some of the best professionals pull off tricks.

It could even give you the nerve you need to improve and compete on your own one day.